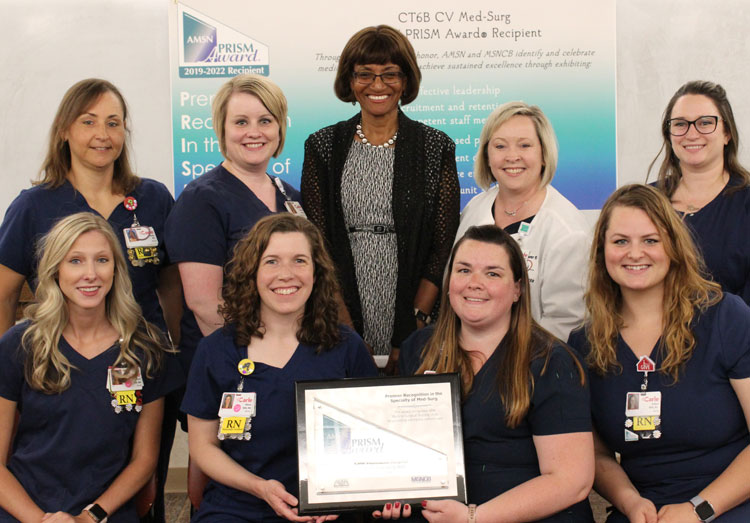 2019 has already been a remarkable year for Carle nursing, now the organization has been given yet another indicator that our nurses are like no other.

“Your teamwork and your devotion to a common goal is what brings us here today. This team is a shining example for all the other hospitals for what it is to have exemplary care and exemplary nursing practice,” said Falker. “Trust me when I say, it is not easy to become a PRISM award winner, you embody everything that PRISM stands for. We believe this award is so significant that it’s not an award you can just mail it has to be delivered in person because the work you do is so significant.”

For CT 6B nurse Crystal Griest, receiving that initial call confirming Carle had in fact been selected to join the merely 36 hospital units in the world who can say they are PRISM awardees, was over a year in the making.

“I had been searching for awards for Med Surg Units/Staff on my own time and happened upon the PRISM award but let it sit for few months,” said Griest. “When I started the Emerging Leaders classes here at Carle, I knew there would be a project and that it should be something that could affect all stakeholders. I wanted to do something that would benefit everyone on the team, boost employee morale and hopefully encourage other units to do the same. I knew that this was something our unit could achieve but I could not do this alone.”

So in the fall of 2017 she got started. Griest pulled together a team that provided a wide variety of perspectives and experiences. Over the next several months they worked diligently to draft the application and pull together data. After 12 more weeks of waiting Greist and her team were devastated to found out they had missed the award by only nine points.

“I did my sulking and whining then pulled myself back together and started working on it again in early October of 2018,” she said.

After submitting the revisions before the end of the year, and waiting 16 more weeks for the decision, she received the news.

“Over almost a year and a half of hard work, late nights, and days where Faith Roberts asked if I was sick (because I looked so run down) were all worth it. It is crazy to think that we are one of the ELITES in the Medical-Surgical nursing world that we knew we were a part of, and now we have the award to prove it.”

effective leadership, recruitment and retention of competent staff members, evidence-based practice, positive patient outcomes, healthy practice environments, and lifelong learning of unit staff members. The CT 6B team will hold the award until 2022. Carle Tower 6B will be just the third unit in the state to receive the PRISM award.

Medical-surgical units that receive the distinguished honor of the AMSN PRISM Award must meet the following six criteria:

And while the submission adequately demonstrated that the team on CT 6B meets this criteria, for Griest and the committee it shows so much more.

“This designation validates the hard work and dedication of every member of the team who cares for patients on CT 6B. It connects our work to the excellent outcomes we strive for. It really does highlight that Carle is providing world class care,” said Cardiovascular Surgical Services Nurse Manager Johnalene Radek, MSN.

For now, the AMSN PRISM award is only recognized on Carle Tower 6B but if this team has anything to do with it, it won’t be the last.

“There are plenty of other Med-Surg units that work hard at providing high-quality care to our patients and do this on a daily basis,” said Griest. “I think patients should know that all of the units at Carle are PRISM worthy. Every person here is a member of a team that wants to deliver top decile care every single day. We all aim to be the best team members available to care for each and every one of our patients, PRISM award or no PRISM award.”